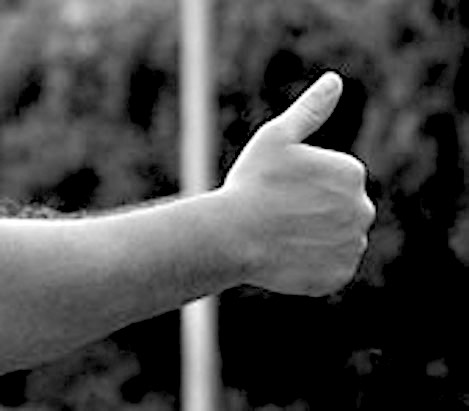 On Independence Day, 1976, I woke up to the smell of piss under a sprawling oak. I was in a city park in Gonzales, where the first shots were fired in 1836 in the Texas Revolution.  A rock dug into my shoulder and a root poked into my back.  I wondered how I’d slept at all but it had been a long day the day before.  The sky was overcast. It was early and quiet, except for the neighborhood of birds conversing above us.  Rodney woke up about the same time.  I said, “Happy Fourth of July!”  He said it smelled like there had been a dog party at our tree.

To our pleasant surprise we happened to be just off 183 so we got our stuff together and hit the road, determined to get home.  It was about six in the morning so there wasn’t much activity.  But not for long!  Only a half mile up the road luck showed up in the form of a rusted, brown pickup. We stuck out our thumbs.  Two hippies who looked like brothers, with identical shoulder-length brown hair and thick beards pulled up and idled beside us.  The dude riding shotgun asked us where we were going.  We said we’d been at the concert and now were headed to Austin.  He said they’d also been at the concert and were going to Austin.  He told us to hop on.  We climbed into the bed of the old pickup and they took off. What luck!  We’d only walked a few steps and already got picked up at 6 in the morning on the 4th of July and we were going all the way to Austin!

The wind whipped our hair and slapped our faces as we relaxed in the bed of the rusted pickup. The air felt much more humid.  The white sky was a bit more oppressive than the bright sunshine that greeted us the day before as we arrived at the concert.  Yet it was more comfortable following the heat we had endured.  We were conflicted about leaving the concert as early as we did, but not having the resources to stick it out.  I thought having a car to sleep in would have made a lot of difference. We’d done it, though, and we could always say we did.  We rode along in silence for miles, gazing at the south Texas landscape, fields of mesquite and angus, the occasional deer, and armadillo road kill.

Suddenly the pickup edged over the yellow line and the driver overcompensated.  We both fell hard onto the loose tools scattered across the bed. There was a brief moment of profanities and then we crawled our way back up to peek through the window into the cab and observed the bearded boys engaging in a huffing party. The hippie riding shotgun had a brown paper bag and was spraying a can of what looked like cooking grease into it. He shoved his face into the bag, and sucked it hard.  He repeated the process and then gave the bag to the driver, who attempted to steer with one hand and hold the bag with the other, as the pickup careened into the left lane.  It became a classic dilemma.  Do we bang on the window and ask them to let us out, or do we risk riding with them to Austin, knowing they might run the truck into the bar ditch, hurling us into the cactus and barbed wire lining the highway?

As it happened, we didn’t have to make a decision as the truck screeched to a stop at the intersection of 183 and 90.  The driver yelled out the window, “Hey, we made a mistake.  We’re not going to Austin.  We’re going to Houston.  Want to go to Houston?”  We immediately answered “no thanks!”  We quickly hopped out of the pickup and the bearded boys slung gravel as they spun out onto 90.  Fortunately, we were only about three miles south of Luling.

There was more traffic on the road but no one considered picking us up at that point.  We’d stick out our thumbs and watch the expressions on the driver’s faces as they whizzed past us.  Some seemed downright angry.  That’s when I realized we must look like “long-haired, dope-smoking hippies” to some of the folks who didn’t want Willie playing in Gonzales, those CLOD people.  That’s when we took each other’s photograph, sticking our thumbs out, begging for rides on the road on Independence Day.  I wore tennis shoes and walked in the grass.  Rod warned me there might be chiggers but I didn’t heed his advice.

Rod and I were both quite political in those days and that’s what occupied us as we hiked to Luling.  We argued politics.  We were rarely on the same page in that regard, but we could remain good friends.  We respected each other’s opinion.  Rod was ahead of his time as a Libertarian.  In fact, later, he would run for Congress on the Libertarian ticket, long before that idea was even fashionable for many.  For my part I was angry Ford had pardoned Nixon, angry that Vietnam had turned into such a mess, and was hoping Jimmy Carter would defeat Ford in the election later that year.  I hadn’t even heard of Carter until the Democratic Convention!  I wanted California Governor Jerry Brown or Texas Senator Lloyd Bentsen.  Rodney argued Government needed to get out of the way of business.  I argued business would run all over us if it wasn’t regulated. It could have been 2012 but it was 1976.

We arrived in Luling on foot as the occasional raindrop tagged us and we silently marched through town as everyone began to awake.  Flags flew from porches and dogs barked as we passed.  At the center of town, a fruit vendor was selling cantaloupes and peaches out of the back of a pickup.  We decided it was probably a good time to have breakfast, since the opportunity presented itself, so we bought a cantaloupe.  We talked to the vendor for a while and told him our story.  He said we were probably going to get rained on but needed to get out of town as quickly as possible because it was against the law to hitchhike inside the city limits.  We took him at his word and hightailed it to the other side of town to eat our melon.  The sky was growing darker and I suspected we were about to get drenched.  I wondered if we might not just go back into town and try to find a dry place to wait it out.

We found the city limits sign and saw a good spot on the side of the road, as it happened just inside the limits, to sit and eat and contemplate what we should do about the weather.  I got the hunting knife from the backpack and began to cut up the cantaloupe.  We’d only had a couple bites when a Ford Pinto pulled up on the highway.  For a moment we just stared at it.  A woman rolled down the window and asked us if we wanted a ride.  So here we are, two shaggy young men, dirty from the road, carving into a cantaloupe with a big hunting knife, and a woman, alone, offers us a ride.  Then, as I’m considering the absurdity of the situation, a Highway Patrol car pulls up behind her.  Rodney’s holding the knife.  We’re just inside the limits.  A woman pulls over.  Great, I thought!  We’re about to be arrested on the 4th of July for hitchhiking inside the city limits with a dangerous weapon and we aren’t even sticking out our thumbs!