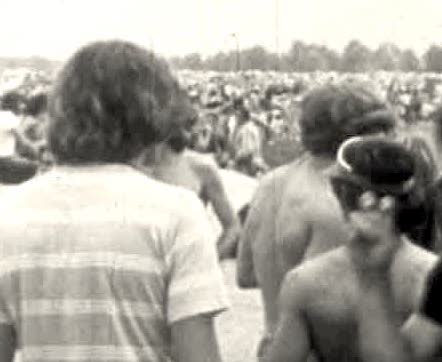 The band was funky.  Funky country.  A bit like Little Feat.  In later years I thought maybe it was Delbert McClinton, but I never found evidence he was there that day.  Rodney and I found a small depression of dirt not far from the stage and staked our claim.  It was hot and there wasn’t any shade so we burned and sweated in the afternoon sun.  Whatever pleasure we’d received from the drive to the concert was slowly ebbing.  People kept arriving and setting up camps around us and I realized then how unprepared we were for the long haul. Some had umbrellas, some tents, some American flags draped over polls that would protect them from the sun.  My face felt seared like a sirloin tossed on the grill.  I was hungry.  We hadn’t eaten.  I dug into the backpack and found some jerky.  We each slowly chewed a piece.

Rod admired the fact we had made it.  We’d come a long way on our feet and now, sitting in our little dusty space, relief was turning to exhaustion.  We had long ago downed the Pearl and I really wanted water.  I noticed just a few feet to our left a red ant bed. I made a mental note not to forget it.  I pointed it out to Rod who said, “Even ants like Willie.” I tried to see where the food booths were set up and they appeared to be about fifty yards to our right.  There was a swelling sea of people moving about in various states of dress and mental states. I told Rod I’d go in search of water and bring him back some if he’d guard our space.  He agreed, saying the day had caught up to him.  He stretched out on the ground and closed his eyes.

The journey to the booths involved stepping around people and avoiding others.  It appeared everyone was having a good time despite the discomfort.  People were openly smoking joints and a couple had taken off their clothes.  Some looked like outdoor concert vets, lawn chairs set up under a big umbrella, two coolers and a dog. There were vendors moving through the crowds, selling blankets and drugs.  A commotion to my right got everyone’s attention.  About 75 yards away I saw the police arresting a couple of the bikers we’d come across on the way in.  When I turned back I was met by the image of a naked, long-haired, bearded, skinny man wearing only boots and a straw cowboy hat with dark brown stains around the brim.  I briefly considered why anyone would do that around so many people, but then, there were a lot of drugs and everyone, it seemed, was ignoring him.

There was a long line for all the booths and I didn’t really know what was being sold.  I decided to find the toilets first of all and was pleasantly surprised to see there wasn’t too long of a line on the men’s side, considering there weren’t many portable toilets.  Most guys were probably just sweating out the beer.  Throughout human history there has always been a longer line for women, and it was long on this day.  When I returned to the booths I saw one was selling beans and rice.  Another was a kind of medical set-up and a guy was being treated for something on his leg.  The big problem was finding water.  All these people out in the heat and no water?  Where are the water stations?  I asked someone who pointed me in a general direction so I went that way.  The music was playing, but there was also a roar of voices and already there was a lot of trash on the ground.  I found a table set up in front of a pickup, apparently with containers of water.  There were plastic cups on a table and a long line of people.  The water was free.  I took two and headed back to Rod.

It was dusk.  The sun had fallen behind the horizon, which definitely cooled things off.  There was a bluish light settling on everything.  Among all the voices I heard the words “He was cut, man,” which meant nothing to me at the time.  Today I wouldn’t think of putting myself through the experience.  When I was nineteen it was incredible.  I may have felt discomfort, but my spirit was soaring, which is why I remember it now so fondly.  Austin360 has an interesting set of facts about the Gonzales picnic.

“Reports wavered between expected crowds of 100,000 and 200,000 but attendance only reached "more than 80,000" (still the largest Picnic). Early arrivals found the site to be perilously short on water outlets and bathroom facilities and the concert ended when a downpour on the morning of July 5 shorted out the PA system – before Waylon or Willie had performed their shows. In between, one person drowned and injuries ranged from stabbings to snake bites. More than 140 were arrested – four for kidnapping – and at least three rapes were reported. Willie would later be sued by two injured picnickers, the owner of the ambulance service and the owner of the ranch.”

Years later in Lubbock Rod and I would talk to Willie on his tour bus and when we told him we were at the ’76 picnic he talked about the rain.  All that rain.

There was no hint of rain by the time I found Rodney again at our spot. I told him about my adventures.  He figured the organizers should have been more prepared.  We decided we’d abandon our spot and take a look around the party.  Doug Sahm took the stage, one of the headliners, and we made our way through the sea of people as night descended.  As much as it seemed magical at night, I do remember it seeming a bit menacing also.  The truth is after a very hot day out in the open a lot of alcohol was consumed and the mood was just shy of angry at times.  No doubt all the weed modified that, but there was acid and peyote, as well, at least that’s what the dealers were advertising.  There would come to be quite a few overdoses.  In all probability everything that could be ingested was there, as lights and shadows danced on both ecstatic and numb faces.

I remember before we’d left on the trip Joyce Herring had told us about the organization that had tried to keep the concert out of Gonzales.  They were called Citizens for Law, Order and Decency, or CLOD.  She got a big kick out of that, a bunch of clods.  Looking at this crowd, though, I could see what they were frightened of.  This was a time, not long after the late-sixties, when a culture clash was ongoing between the World War 2 generation and their kids, between the “We don’t smoke marijuana in Muskogee” crowd and the “Up Against the Wall Redneck Mother” crowd.  Willie sort of brought the rednecks and hippies together to help create a unique Texas culture, a hybrid, to the point, in fact, when even Merle Haggard was accepted and his iconic song became an ironic song.

I remember hearing Sahm’s signature number, “Is Anybody Going to San Antone,” thinking it didn’t sound like Charlie Pride, when I began to wonder how we were going to get home.  Rodney agreed.  We didn’t have a car there.  Logistics began to occupy us.  Somehow we were going to need to get back to Amarillo by Tuesday when I would need to be back at work.  I hadn’t had the job long and certainly didn’t want to lose it.  It only took us a couple rides to get down to the concert, but traffic was moving that way.  Going back was a great unknown, back all the way to Amarillo.  How long would it take us?   We were talking to some guys who were complaining they hadn’t brought enough beer when one of them pointed out Willie Nelson had joined Doug Sahm onstage.  That was way cool.  We watched Willie Nelson.  We were part of this great big Texas music scene.

That pretty much decided it for us.  We’d come to see Willie.  We saw Willie, even if it wasn’t his set.  We weren’t prepared for the long haul at the concert, didn’t have a car, and had limited cash.  So we decided we needed to find a way out to be able to be on the road first thing in the morning for God knows how long on our way back to Amarillo.  We started asking folks if they knew of anyone who was leaving and we finally found some guys who were going back to Gonzales to get more beer.  We hopped into the bed of their pickup and they drove back up the road we’d traveled only a few hours before.  Traffic moved faster heading out, although there were still a lot of cars heading into the concert.

We were dropped off in town by a beer joint.  We went inside and sat at the bar.  To our pleasant surprise they sold what we called “bolas” back then, or spicy pickled sausages in big jars.  We ordered two of those and a couple rounds of Shiners.  We hung out in the bar where they had a phone and I contemplated calling my folks but Rodney and I both had committed to finding a way back.  It became a challenge at that point and we were determined to meet it.  When we left the bar, somewhere around midnight, satisfied with beer and sausages, we wandered in the dark until we found a park.  We sat under a tree and waited for dawn.