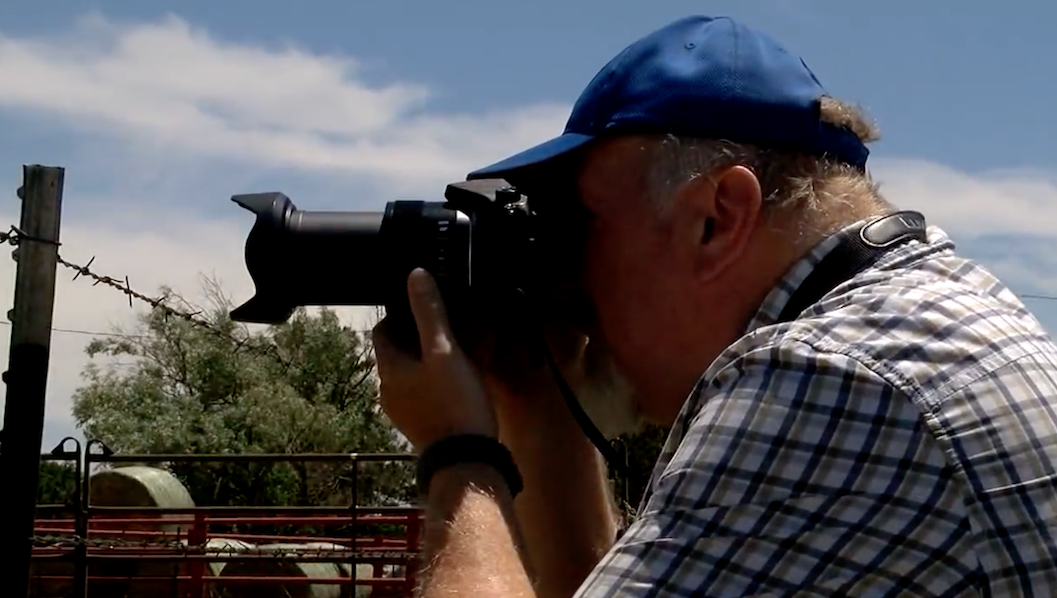 Some of the best experiences (and a couple of the worst) I’ve had working in news, have been the time spent with news photographers, or videographers.  In the old days a reporter and photographer would go off to do a story together, a duo with separate functions, but working to achieve the same thing.  Unfortunately, the businesses that own local news stations are in the process of phasing out photographers and hiring “multimedia journalists,” who both “shoot” and “report.”  The reason I put those words in quotations is because these days, more often than not, neither of those functions are at the levels they used to be precisely because one person usually doesn’t pursue both disciplines with the same intensity.  There are exceptions, but they are rare.

While it’s true I enjoyed shooting my own stuff for Panhandle Spirit, practically everything I did I learned from the many photogs I’ve known.  Also, when I did do the multimedia journalist thing for actual news, I didn’t enjoy it as much, because basically, you’re expected to do more with less, especially with less time.  It’s difficult to do a decent story justice.  Above all I missed the camaraderie.  Reporters used to spend a lot of time with photogs, sharing the work burden, but also bouncing ideas off each other if the relationship was positive.  It could be bad also if you didn’t get along!

I worked with Richard Torruellas in Phoenix.  He was a little guy, older, but in great shape.  We were doing a story on how a lot of people were using goats to keep the grass low, especially in areas that were prone to wildfires such as in the mountains and forests.  We were working with the older HD format then, meaning we had to carry a big tape recorder with us as well as a big camera and tripod.  We met with a Navajo goat herder on a reservation up in the mountains.  Rich wanted to get a particular shot so we hiked up a couple huge hills with all the equipment.  It was a good angle, looking down on the herd of goats.  We jokingly called Rich “Cecil B. Demille” because he had some film training and would frequently do things cinematically.  He set up the shot and yelled down at the guy to herd the goats to one side of the valley.  Then yelled at him to go back.  He did that twice.  It was a hard hike but the video was worth it.  Rich could be temperamental at times, he’s an artist, but for a little guy he has the biggest heart of anyone I’ve ever known.

Chad Mahaley and I shot all kinds of stories.  You name it, we probably did it.  His favorite was being on the stage shooting the bands at Midnight Rodeo.  He even shot Cooder Graw when they opened for Willie Nelson in Lubbock, and we interviewed Willie on his bus after the show. Mahaley and I drove from Amarillo to Cape Canaveral and back to cover Rick Husband’s first shuttle flight.  We operated on very little sleep and when the time came to get all the video and interviews we needed to shoot we were racing all over NASA and then all over Orlando during rush hour to get to the television station where we could upload it to the satellite.  We didn’t know there would be so many toll roads and I remember being on the phone with Kari King and I told her we’d run out of change and we just ran a toll booth.  She said, “Oh my God!  You’re going to jail!”  We didn’t.  On the way back we stopped in New Orleans.  Chad and I had lots of adventures.

Mark Dukaj was an Albanian speed demon.  He once sliced a bird in half with the radio antenna one day when we were stormchasing.  I can’t remember all the stories we did, there were so many, but we drove all over the Panhandle.  I know more about Albania than Lefors.

Photogs can keep you honest. WT graduate Roushell Hamilton learned from Leigh Browning, who had very high expectations.  It was understood we would get at least two interviews for a story with very rare exceptions.  We went to Clovis to cover a murder that had happened the night before.  We had a difficult time finding the site of the killing and then a very difficult time getting people to talk about it, especially law enforcement.  We were running up against deadline to get back and put it all together and I was ready to go back but Ro wouldn’t hear of it.  He kept pressing me to get the interviews.  Finally, through sheer perseverance we got them and got back just barely in time to get the story on the air.  He had quite a work ethic.  Most importantly, he turned me on to Whataburger.

There’s also the strange story regarding Buddy Squyres.  He and I were shooting in New Mexico in the middle of nowhere.  We found ourselves at the site of an Indian burial ground and suddenly Buddy’s camera stopped working.  We went through various forms of panic, calling the engineers back at the station, asking them to bring another camera, but in the end, couldn’t get the camera to work.  However, no sooner did we leave the site, the camera started working.  We went back to the site, and it stopped working.  We left, it worked.  You can talk all you want about some sort of weird electronic anomaly or some radar nearby interfering with the signal.  Buddy and I both know it was the goldurn spirits!

I worked with many, many others, both full-time and freelance, had fun, endured hardship, or argued.  I’ve got a lot of stories.  I give a big shout-out to all the great photogs, men and women, who have covered a story with me.  Besides the relationship an anchor has with a co-anchor, the reporter/photog relationship was just as important.  It seems a shame in order to cut costs the businesses dictating policy are cutting out the photog, who has added a great deal to the “product” we call news.