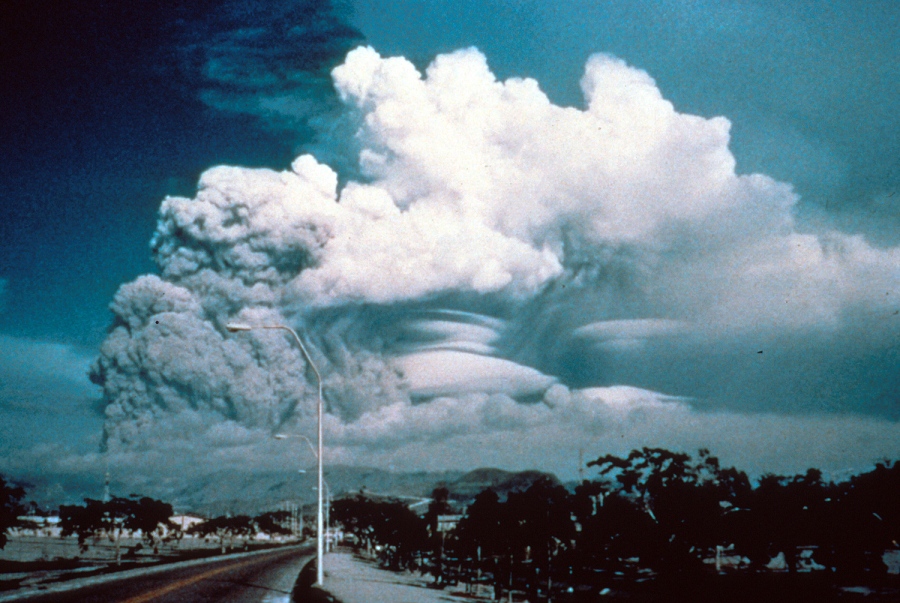 I look at the photograph above and marvel at the destructive power of the earth.  What strikes me is all the time I was stationed at Clark Air Base in the late seventies, Mt. Arayat was always in view and I always thought in the back of my mind it was a volcano ready to blow.  I’m not even sure while I was there I’d even heard of Mt. Pinatubo, which erupted in 1991 and resulted in the ultimate closing of Clark Air Base and Subic Bay Naval Base.

I was about 20 back then, traveled to some degree, but nothing prepared me for the decadence.

Before I continue I want to make a point.  The Filipino people are some of the most amazing, beautiful, loving, spiritual people I have ever known.  I can absolutely understand why military people would want to retire there.  Baguio, up in the mountains, is stunning.  Manila is a vibrant, fascinating city.  I had adventures all over the place and had a wonderful time with wonderful people.  If, however, I had only ventured off the base into Angeles to sample the goods in the immediate vicinity, which is precisely what some Americans did, fearful as they were to leave their American comforts on the base, I would have had a skewed impression of the Philippine Islands, or “the P.I.,” which is what we called the place.  Not far down the road, the Navy docked at Subic Bay, near Olongapo, which had an even more decadent reputation.

I’m not getting into specifics, but anyone who has been to a Mexican border town, such as Juarez, you know what I’m talking about, drinking, prostitution and darker pursuits.  Keep in mind, the Vietnam War had finished less than a decade before.  There were still many Vietnam vets in the service and in the civil service.  The P.I. had been a major R&R stop during the war.  There was no AIDS.  There was no drug testing.  There was lots of penicillin.

Again, this was not unique to Angeles, it’s only where I was stationed at that time and where the cold hard facts of capitalism hit me personally.  My brother ran into a similar experience on a mission trip to Mexico.  It would seem on the periphery of American culture, in countries without enforced laws or any laws at all, where poverty is rife, desperation and greed create a zone of corruption where prurient interests can find satisfaction.

Also, I’m not talking about certain areas of the world where the same things are available for those willing to pay for them.  I’m referring specifically to areas off military installations or in border towns in countries that are otherwise morally opposed to such activities yet tolerate them because of the money being made.  Why else would they tolerate them?  And hypocrisy aside, the United States is supposed to be morally against such activities and certainly enforces laws within its borders.  That stuff didn’t happen on the base.  Well, except during the war, of course.  During the Vietnam war, on American bases, especially in areas of conflict, any number of things could have happened.  Let’s just say I’ve heard a lot of stories from the many Vietnam vets I’ve known.  Hey, you could be dead tomorrow, right?

In peacetime, though, in the P.I., even as a lowly airman I was considered rich compared to the average Filipino in Angeles so my dollars were in demand.  The black market was flush with American products.  When I first encountered it all I was shocked and somewhat frightened.  After a while, with the advice and encouragement of older and more experienced men, I navigated my way through and around it.  Fortunately, I went beyond it and found a world with people very much like me.  Had I not done so, I would have come away from that experience with a negative view of the country, except as it pertained to its willingness to serve my desires.

It reminds me of that Iggy Pop song David Bowie sang:

Now, some might call it Imperialism, but not to put too fine a point on it, I would certainly call it corruption of a very religious culture.  The average Catholic Filipino back then would not have condoned such behavior.

You could argue this has been going on since the beginning of time and you would be absolutely correct.  Furthermore, it certainly doesn’t come close to comparison with the very real and brutal crimes that happen to people in war.  Still, people are being victimized and a lot of power over others is given to immature young men who have no conception of the part they’re playing in a much larger cultural conflict.

So, not that I believe it had anything to do with it - I don’t believe God was punishing those cities by raining volcanic ash upon them, something akin to Lot’s Biblical experience.  However, because of my specific experience at that time, it somehow seems inevitable such a thing would happen, precisely because of the Biblical nature of my culture.  It serves as an explanation, certainly not a scientific one, but a moral one.  It’s a reminder that turning a blind eye to corruption will only result ultimately in destruction.