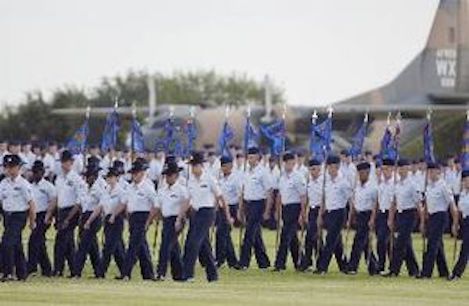 I once got yelled at by a Major in the Air Force.
In honor of Armed Forces Day this weekend I thought I’d relate a little adventure I had while going through boot camp at Lackland Air Force Base in San Antonio, Texas.

I have never mischaracterized the weeks I endured before I was stationed in the Philippines as a disk jockey (and the P.I. was profoundly dangerous duty, spinning vinyl all day in Paradise.) No, boot camp was a true test of my character. I had to leap out of bed at the sound of a distorted reveille played off a cheap tape recorder through the Lackland PA system. Then after a massive breakfast I fought to stay awake during classes explaining the “I’m Okay, You’re Okay,” psycho-babble that was popular in those days. And I had to march. We marched here and there and then back over there. We marched everywhere. Turns out I was a pretty good marcher. I could land those heels and make those turns sharply and in time. I was quickly promoted to first in one of the four lines we marched in, which corresponded to the four rows of beds in the open bay that made up our barracks. What I didn’t realize is that meant I was responsible for the other guys in that row doing what they needed to do to pass inspection.

Now anyone who’s been through Air Force basic training understands it’s pretty much a mind game. They mess with you. You adapt. We learned to keep our beds made, even when we slept in them, by getting in and out of them carefully without disturbing the tucked corners. They’d shaved our heads so we used “Prell” for both soap and shampoo because it came in a little plastic tube which was easy to keep clean, which meant no bars of soap in your area that could leave a mess. We did not stash away food. Food creates a mess. Simple, right? Most guys understood it was our goal to endure those weeks and leave. Of course, there’s always that one guy who, either through stupidity or a hatred of authority played out in passive aggression, just doesn’t get it. His bed was a mess, he used bar soap and there were crumbs all around his area. I explained to him what he needed to do and I wasn’t about to do it for him. He flunked inspection and that meant I was called into the office.

The two sergeants said I wasn’t doing a good job leading my row and I had to get that guy in line but I said I didn’t really care about that guy. If he couldn’t or didn’t want to master the simplest way of getting through basic like everybody else, why were we wasting time on him? They said I wasn’t being a leader. I said they chose me for that role because they liked how I marched and that’s no way to choose a leader. They asked me what my AFSC was (my Air Force job) and I told them I was a broadcast specialist, which prompted knowing looks between them. I told them I grew up in the Air Force. I did. Dad was a lifer. They said I knew then that boot camp was BS.  I said yes. They said okay and dismissed me.

The next day I got a phone call. It was the Public Relations office at Lackland. They had heard I was a broadcast specialist and they asked me to voice a recruiting tape for the phone service. You know, people would call a number and the recording would explain how the Air Force needs recruits for certain jobs. I said Hell yeah! They picked me up outside the barracks and we went to the main base. Keep in mind these guys were all in the Air Force. I recorded the tapes and they bought me lunch and I hung out with them all day and then they dropped me back at the barracks. What a break from boot camp!

Well, file this under “the left hand doesn’t know what the right hand is doing.” No one bothered to tell my Training Instructor (we called them M.T.I.s in the Air Force. Military Training Instructor, not the more common drill instructor) or our Commanding Officer where I was so they thought I’d gone AWOL!

I was summoned to the Major’s office and my T.I. escorted me. The Major was in a rage and screamed at me about going missing and demanded to know where I was. So I told him. The Public Relations office wanted me to voice a recruiting tape for a job. My T.I. asked me what job I recorded. T.I., I said, and I caught a hint of a smirk on his face.

The Major was livid and told me if I did it again I'd have to start Basic all over again.  My T.I. winked at me.  I learned a valuable lesson about psychology that day.  Obviously the enlisted men were "okay."  The Major was "not okay."